Last Friday I was invited to talk about the JBoss Application Server project/Enterprise Application Platform and Java EE6 at the Profict Java Summer Camp day in The Netherlands. 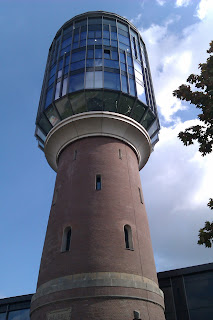 It was a bit of an exercise trying to spot the venue on Google Maps because all you could see at this point was a water tower! Apparently, the Google Maps picture was a bit outdated and there was a new office building next to the water tower, however, the renovated tower was indeed part of the complex and the Profict crew was kind enough to take us for a coffee at the top, which offers a great view to the surroundings.

Now onto the actual conference,  my talk was first so I had the opportunity to present Java EE6, from the point of view of the JBoss Application Server project. I've talked about how we started with JBoss AS6 implementing the Java EE6 profile, then moving on to AS7 with a radical architecture change, as well as our current plans about AS7.1 and full profile certification. Slides are available here.

EAP6 will be based off of JBoss AS 7.1 and if you want to get on the bandwagon there is an early access program, or alternatively, start off by developing on the "everything" distro of JBoss AS 7.0.2, released last week, and that should ease the transition to AS 7.1/EAP6 when the time is right.

If you want to use JBoss AS7 in a cloud context, try OpenShift Express/Flex, Red Hat's PaaS offering.

Next engagement is going to be at Devoxx11 for the JBoss AS7 Community BOF with a bunch of other JBoss Developers, so hope to see you there!