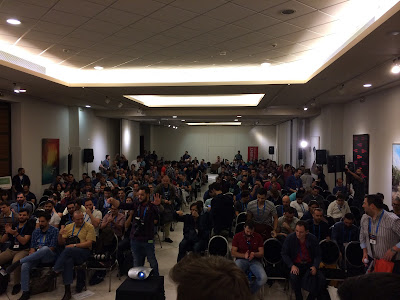 After a very successful Voxxed Days Thessaloniki last October, it was now Athens' turn to host the popular event series, and another chance for yours truly to visit the motherland, talk about the interesting stuff we are doing here at JBoss/Red Hat, meet with old friends and make new ones.

Voxxed Days Athens was very well attended with something like 450 participants, numerous sponsors and a great lineup of international and local speakers.

I very much enjoyed the talks of
and finally
Comparing Voxxed Days Athens & Thessaloniki, I think the latest event felt more organized and especially technical support for the speakers was much better. On the down side, I've attended one talk at the Silk-B room and it was relative small for the number of people that wanted to get in. Also, the cinema format of Devoxx events is probably more preferable when it comes to the size of the rooms and the guaranteed good visibility for all.

Those are just minor considerations for future events, because the team and volunteers behind Voxxed Days Athens did a fantastic job organizing such a high quality event. There is a vibrant community of developers in Athens and events like this provide an excellent opportunity for people to get together, socialize and learn from the best, right there at your doorstep. I can only hope there will be more of that.

/Dimitris
Posted by Dimitris Andreadis at 2:10 AM