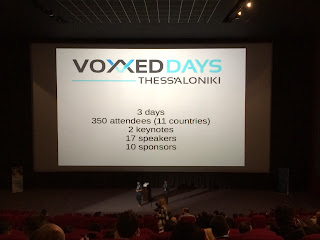 It's been a few days since the successful completion of the Voxxed Days conference that took place in the beautiful and historic city of Thessaloniki. Here's a quick recap.

I've had presented at a Voxxed event before,  but this time the conference had special interest for me not only because it was the first time the VoxxedDays series of events is coming to Greece, but also because I was eager to meet with the active scene of the local developer community of what we use to call the the co-capital.

The event which included three tracks was organized at the Village Cinemas Multiplex, following the very successful Devoxx format. There was an impressive lineup of 17 international speakers that attracted some 350 attendees from 11 countries. Those are impressive numbers for a first time conference.

I pretty much stayed on the Java/DevOps track, mostly centered around the theme of Microservices and CI/CD environments. My talk on WildFly and WildFly Swarm, our new toolkit for creating microservices on top of the robust WildFly runtime using best of breed Java EE and thirdparty components was also in that track. I've had great discussions on the subject with a large number of folks after the talk and during the beer session that followed the event. If you are interested to find out more you can find my slides here.

I've enjoyed the opening and closing keynotes on JDK9/Modules and Developer Careers respectively and I heard good comments about the other two Methodology/BigData and Web Development tracks.

I've also had the privilege to participate at the 8th Episode of the Devastation podcast talking about WildFly, Application Servers and Opensource software development. If you are an aspiring developer that wants to enter the magical world of opensource, I have some very practical advice for you in the podcast (as long as you understand Greek, that is).

I need to congratulate the guys at the organization and the large numbers of volunteers that helped pull this off. You guys did a magnificent job organizing a world class event, Bravo!

The problem is that you've raised the bar for subsequent events - we want more! And more we will get because VoxxedDays will be moving to Athens the coming May, so I'm looking forward to that.

Until the next time!
/Dimitris 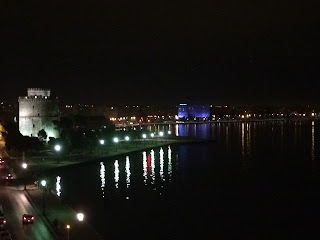 PS
If you want to read more about VoxxedDaysThessaloniki, check out those links, too:

Posted by Dimitris Andreadis at 1:16 AM