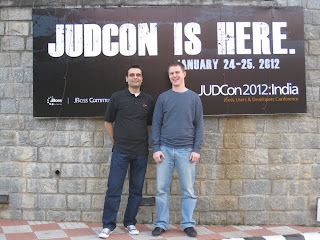 Back to base after attending and presenting at the first ever JUDCon in India!

The 2-day event was fully booked and registrations reached the record number of close to 800 participants!

I had the opportunity of taking part along with other fellow JBossians at the 1st day's expert panel, where we had the chance to answer lots of questions, many of which were related to JBoss AS/EAP.

During the panel discussion, as well as during my first talk on JBoss Application Server 7 - Reloaded, and the many private discussions I had between sessions, I realized that pretty much everyone uses JBoss AS in India, all the way back from versions 3 and onwards, while usage of JBoss AS 7 and Enterprise Application Platform (EAP - our supported offering) is picking up nicely.

There was good coverage of JBoss AS 7 through different talks, most of which were recorded and should become available soon. It was very encouraging to see people's reactions on the latest installment of the JBoss AS series and the significant architectural changes and innovations that JBoss AS 7 brings.

The developer audience was absolutely fantastic, with packed sessions and people asking one question after another, until the organizers had to push for the next session to begin! People would come to me with their long lists of questions and discussion items related to the inner workings of the server.

My second session on The 7 Secrets of Successful Opensource Developers was also packed, and I was very pleased to have to answer questions and provide tips and personal advice for a solid 20' after the presentation was over. I expect we will be seeing some interesting contributions coming from Indian developers over the coming months :-)

Some coverage of the event from various people inside JBoss:
And outside JBoss:
A great JUDCon, overall. Looking forward for the next opportunity to visit Bangalore!

/Dimitris
Posted by Dimitris Andreadis at 2:02 AM

Who's that hansom developer next to you? :-)